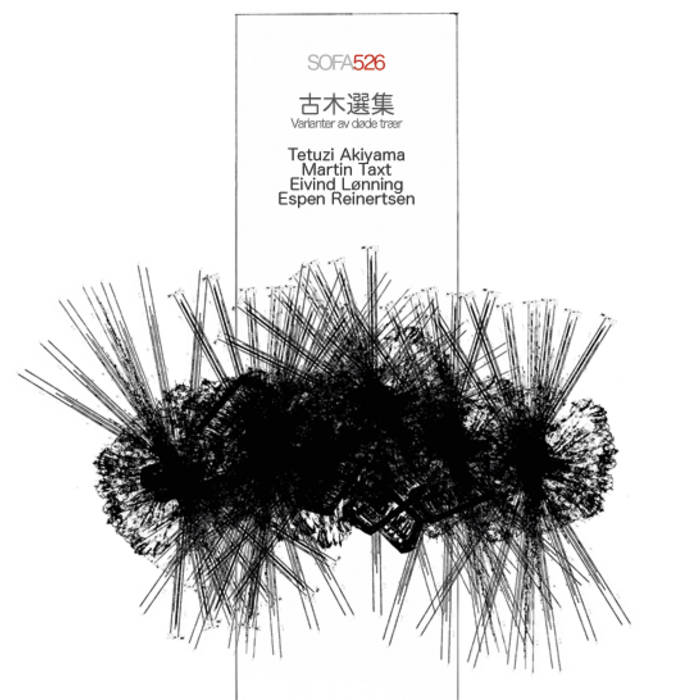 Tetuzi Akiyama is a friend of mine, and my colleague musician, and my neighbour. One day, his daily report on himself delivered a news about his latest recording with three Norwegian musicians, which he had done during one of his frequent outings abroad. Like always, he was talking to me as if he was mumbling away to himself, like always, I knew he expected me to listen to his monologue so I was nodding as if I was listening and understood just to be nice and friendly to him. At some point, like always, the vague idea of what he had been talking about started taking its form, and I figured out he was asking me to do mastering work on the recording. No problem. That's what I do for friends' music.

Tetuzi told me that the band members and himself had come to an agreement that they had done an adequate work on sound during the mixing session, so he did not want me to change the sound character so much from the sound of the original mix. All right. I know that. Almost nobody who employs me wants me to touch her/his sound so much. Instead, they often ask me to take care of gaps between pieces, and noise before and after their actual musical performances. Most of musicians prefer clean start and end. They would simply ask me to eliminate all the noise before the music starts, and after the music stops, or ask me to give a track a smooth fade out. Most of the time, I would say OK. But sometimes, I would suggest musicians to leave some bits of those noise, telling them how much I think all those «unwanted noise» could give their music liveliness. Some of musicians agree with my suggestion. So, those narrow gaps between tracks became my area to work on. Thanks to the musicians. Now I am a master of «Before and After.»

It was a blossoming period for cherry trees in Tokyo. The next afternoon, I was walking through a path to go to Tetuzi's place with the master CDR in my hand, under the cherry trees fully blossomed like everywhere in Tokyo. Petals were dancing and showering down in the occasional flurry of wind. I thought of enclose one or two of those petals in the parcel of the master CDR, but I restrained myself from doing so. I sometimes have to behave myself like a clean-cut engineer.

Featured sounds from Fly Lo and Ahmed Idris, plus Mother Nature hops on to drop off new project